In recent years the Kubernetes wave has taken the software world by storm. And for good reason. Kubernetes makes it easy for developers to build robust distributed systems. It provides powerful building blocks for deploying and managing containerized workloads. This makes it an enticing platform for the sprawling microservice “apps” of today.

Unfortunately, all this power and flexibility carries with it enormous complexity. Kubernetes is not a PaaS (Platform as a Service) like Heroku or Cloud Foundry. It does not build your app from source or abstract away all the gritty details. It does, however, provide many of the necessary primitives for building a PaaS.

Over the past three years, I’ve worked as a full-time contributor to Cloud Foundry. During that time I’ve come to appreciate the simplicity of the cf push experience.

I’ve grown fond of pushing raw source code and using buildpacks. I enjoy the ease of creating and mapping routes. I like that my app logs are a mere cf logs away. That is if you’re deploying a stateless 12 Factor app. If you’re not – or even if you just need to go a bit off the rails of your PaaS – the platform can hinder more than it helps. It’s these use cases where Kubernetes shines.

You don’t have to completely forgo the PaaS experience you’re used to, however. In this post we’ll take a look at two tools: pack and kapp that help bring some of that that PaaS goodness to Kubernetes.

If you want to follow along, you’ll need the following:

I used an inexpensive single-node managed Kubernetes cluster from Digital Ocean. It uses a Digital Ocean load balancer and, all in all, I expect it to cost about $20 a month1. I have DNS configured to direct traffic on my domain *.k8s.downey.dev to the load balancer’s IP and the LB itself points to an NGINX server in the cluster.

I am using ingress-nginx as my Ingress Controller and installed it using the GKE (“generic”) installation steps here.

Since I’m using a .dev domain I need to have valid TLS certs since .dev domains are on the HSTS preload list for mainstream browsers. To automate this I used cert-manager with the following ClusterIssuer.

I loosely followed this blog post for the Contour Ingress Controller to set that up.

1$20 for a k8s cluster is still nothing to sneeze at, so if you want to help me pay for it sign up with this referral link 🤑

Our App The Belafonte 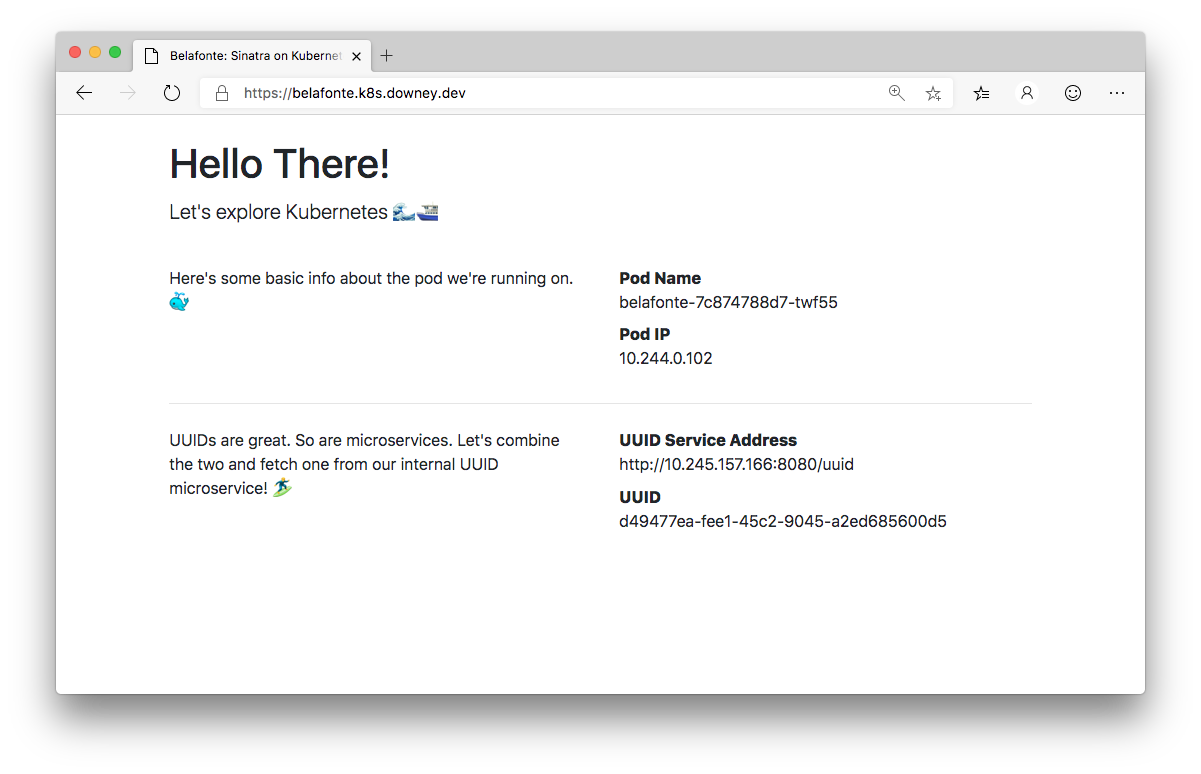 Throughout this post we’ll be deploying a simple, stateless Ruby app called belafonte. It is named after The Belafonte, the esteemed research vessel helmed by oceanographer Steve Zissou and it will carry us safely on our Kubernetes journey. If you want to follow along, simply clone the app.

To make things a bit more interesting, belafonte relies on a microservice to feed it UUIDs for display. This is a bit contrived, but that’s ok. We’ll be deploying a small Python app called httpbin to serve this purpose.

At the end of the day, navigating to the app will return a simple webpage containing some information about the Kubernetes pod that it is deployed on as well as our artisanally crafted UUID.

Kubernetes is a platform for running containers. That means to run our app, we first must create a container image for it. Traditionally this would mean creating a Dockerfile to install ruby, download all of our dependencies, and more. For simple applications this can wind up causing a lot of overhead and maintenance. Fortunately, there’s another option.

As I mentioned earlier, buildpacks are one of my favorite features of PaaSes. Just push up your code and let the package handle making it runnable. Lucky for us, developers from Heroku and Cloud Foundry have been working on a Cloud Native Computing Foundry project called Cloud Native Buildpacks that lets anyone have this power.

We can use the pack CLI to run our code against Heroku’s Ruby Cloud Native buildpack with the following command (you may need to docker login first to publish).

This will produce an OCI container image and publish it to DockerHub (or a container registry of your choosing). Wow!

One thing to note is that, at least for the Ruby buildpack I used, I did not get a default command for the image that worked out of the box. To get it working on Kubernetes I had to first invoke the Cloud Native Buildpack launcher (/cnb/lifecycle/launcher) to load up the necessary environment (adding rackup, bundler, etc. to the $PATH). The command I ended up using on Kubernetes to run the image looked like this:

Workloads are typically deployed to Kubernetes via YAML configuration files. Within the deploy directory of sinatra-k8s-samples you’ll find the necessary files for deploying the belafonte app, the httpbin “microservice” it depends on, and a file declaring the belafonte namespace for them all to live under.

The deployment.yaml defines the Deployment for our app. This is where we’ll tell Kubernetes how to run our app. It contains properties that declare how many instances of our app we want running, how updates should be carried out (e.g. rolling updates), and where to download the image for our container.

The snippet above shows that we’ll be using the image we just built with pack and that we’re setting some environment variables on it.

The service.yaml file contains configuration for setting up a Kubernetes Service. It will tell Kubernetes to allocate us an internal Cluster IP and Port that can be used to hit our app.

You can view services using kubectl get services. Once we deploy our app, we’ll see the following services in the belafonte namespace.

Since our cluster has an Ingress Controller installed (ingress-nginx), we can define an Ingress via ingress.yaml.

At its most basic, this configuration instructs the ingress NGINX to direct traffic destined for belafonte.k8s.downey.dev to the belafonte service defined by service.yaml. Since we’re using cert-manager, the annotations on it will instruct cert-manager and the letsencrypt-prod ClusterIssuer to issue and serve LetsEncrypt TLS certs for this domain. This part is only required if you want to support https, but it’s simple enough so I’d recommend it.

Similar YAML config exists for httpbin in the deploy/httpbin directory (minus the Ingress since we do not want it externally reachable).

Installing the App with kapp

All of that YAML declaritively represents the desired state we want our applications to be in. If you just kubectl apply -f <file> every file in that deploy directory you’ll get a running belafonte app and an httpbin microservice to back it. Unfortunately, kubectl apply can be a pretty blunt tool. It’s hard to tell what it is going to do without hand inspecting each YAML file. Options like --dry-run and commands like kubectl diff exist to help improve things, but those used to doing git push heroku or cf push may still desire a nicer UX.

This is where the Kubernetes Application Management Tool, or kapp, comes in. I like kapp because it provides something a bit closer to that PaaS experience and you don’t have to install anything special on the k8s cluster.

With kapp we can kapp deploy our entire deploy directory and deploy the app all in one go. If you’re following along, go ahead and run kapp deploy -a belafonte -f deploy and check it out!

It will show what changes it expects to do and prompt first before applying. It then applies the changes, tracks all the resources that were created as part of this “app” (as specified per the -a flag), and will wait until everything is running (by checking the status of the resources) before exiting. It is even aware of some of the typical ordering requirements of config. For example, it is smart enough to create namespaces and CRDs before applying config that might depend on them. It stores this logical “app” definition within a ConfigMap so the definition of the app is persisted on the Kubernetes api. You can switch computers or come back days later and kapp will still recognize your app.

To be fair, getting logs with kubectl isn’t too tough. Just kubectl -n belafonte logs -l app=belafonte -f and we can stream them out for pods with the app=belafonte label. As the number of apps you want to stream logs for grows, however, that label selector can become cumbersome. Streaming logs is a bit friendlier with kapp. Just run kapp logs -a belafonte -f and you’ll stream logs from every pod that kapp deployed. In our case that’s both httpbin and belafonte.

When you’re done experimenting, kapp makes cleaning up convenient as well. Simply run the following to delete everything that was deployed.

One gotcha, though, in the case of the LetsEncrypt certs that cert-manager provisioned for us. LetsEncrypt rate limits certificate requests for a particular domain to 50 per month. If you plan on repeatedly churning these certs (like I did while writing this post) you’ll quickly hit those limits. Luckily kapp supports filters so you could do something like kapp delete -a belafonte --filter-kind=Deployment to only delete the deployments and leave the Ingress definitions (and associated certs) around.

So if you enjoy the app developer experience of a Platform, but require the power and flexibility of Kubernetes these tools are definitely worth a look. If you’re interested in learning more, I recommend checking out the following resources: